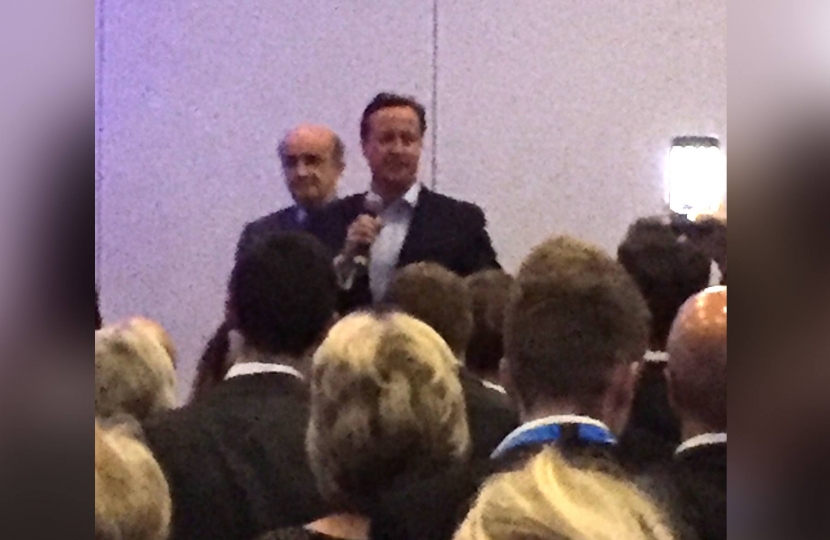 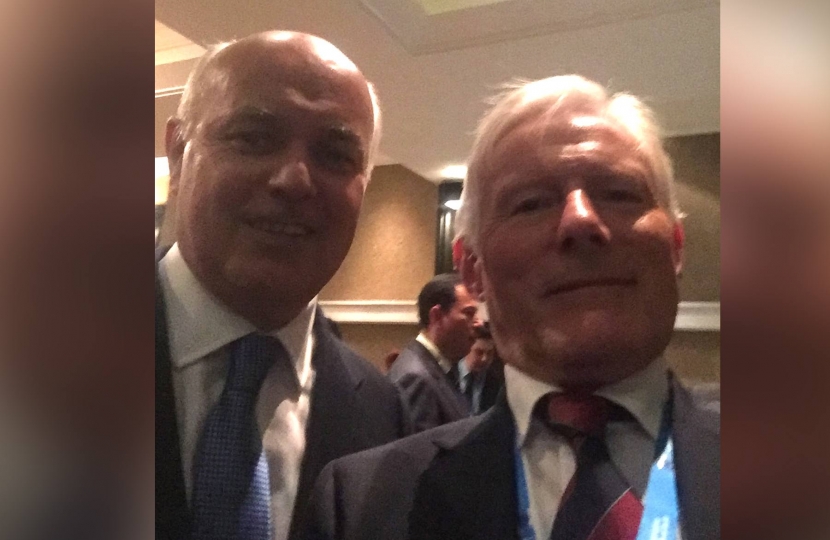 This year’s Conference theme was Security, Stability & Opportunity. There was certainly a need for security as we battled through the activists of the opposition each morning.  In fact Boris Johnson likened it to going through the Khyber Pass to reach conference. He thought there should be more attention to ball games in schools since their throwing skills were seriously deficient and they had missed every opportunity to hit him with the eggs!

With over eleven thousand attendees at conference it was an all time record. Macclesfield again contributed to the numbers and I counted at least fourteen of us when we were invited to meet with our MP, David Rutley in the Octagon Bar of the Midland Hotel. Unfortunately we missed Jackie who having arranged our hotel accommodation for six of us at the Stay Inn, was unable to attend due to family illness.

I couldn’t help wondering how the content of this conference would follow on after last year when we spelt out our plans for the future.  After all, we had finally achieved our goal and won the general election returning to government for the first time in eighteen years.

Conference opened with Party Chairman, Lord Feldman of Elstree reminding us how the garden at number 10 had been saved since the ‘Ed Stone’ had been scrapped to history! Our success had been down to our world-class campaign team and how we will now back Zach Goldsmith as our candidate for Mayor of London in 2016.

There were undoubtedly high lights during the week. In addition to meeting members from Tatton at the North West reception who introduced themselves as George’s Angels, we were honoured by a visit from David Cameron.

We are most fortunate to have an MP in David Rutley who is now PPS to Iain Duncan –Smith, Secretary of State for Work and Pensions. Among the various speeches IDS maintained continuity with his on-going good solid message and moreover gave David a mention. After attending the extremely interesting Centre for Social Justice Fringe meeting  - ‘An evening with IDS’, whilst affording me a photo opportunity he told me what a great job our MP was doing.

George Osborne’s reference to the biggest transfer of power to local government, allowing all business rates to be retained and the abolition of the uniform business rate was particularly well received.

I was especially impressed by the enthusiastic performance by Greg Clarke, Secretary of State for communities and Local Government. He reminded conference you don’t get conservative government without Conservative Councillors and that a total of 5537 were elected on 7th May 2015. I suppose his session had an additional draw when he invited Lord Heseltine to report on the economic growth, who declared that the Northern Power House is a transformation of what can happen anywhere in the country.

Baroness Helic from Bosnia introduced the Home Secretary, Thersa May who presented a powerful speech about immigration and the asylum strategy etc., so that Britain could be A Beacon of Hope.

Once again Dr Tania Mathias introduced Boris Johnson describing London as exciting, vibrant and surprising just like Boris. His speech certainly lived up to expectation during which he alluded to Sturgeon and Salmon and all those fishy people. Furthermore, how life expectancy had increased in London since he became Mayor, showing that people lived longer under the Tories!

The final session of each day took place in the Exchange Auditorium as a closed-door Conservative Party Review event. It was especially interesting to hear the views and comments exchanged between the Party Chairman, his panel and party members. Subjects such as recognition of the failure of Merlin and the benefits of the replacement programme ‘Vote Source’ were discussed. It also afforded the opportunity for our Chairman, John Bowden to enquire about the forthcoming boundary changes.

Among the variety of fringe meetings a couple of us attended The Guardian- Transport Devolution: The ticket to greater productivity? We were in support of our MP who was on the panel. David was true to the cause and spoke about the narrative of the Power House of the North and how we should harness our industrial strength whilst offering Macclesfield’s Zeneca and Alderley Park as case studies for the area plus the need for high-speed rail to connect the areas. He also referred to the Rainow Volunteer Bus as an example of a way of meeting the need for transport in rural areas.

Of course the ultimate highlight is always the Prime Minister’s speech on the last morning of conference. Queuing commenced before 9am to gain a seat in the hall. The format is to summarise the contribution from the many speeches and from my perspective it was one of his finest. He told conference he had the greatest team a Prime Minister could have ever had.  It was apparent there was nowhere for the new labour leader Jeremy Corbyn to hide and the Prime Minister responded strongly to Corbyn’s adverse opinions concerning, the killing of Binladen, Trident and taxation. He referred to Boris’ great speech describing him in rugby terms as the ‘tight head prop’ whilst he saw himself as the’hooker’. However, he was quick to point out this was not in a chapter of Michael Ashcroft’s book!

In conclusion he wanted a great British take-off that leaves no one behind and a greater Britain made of greater hope, greater chances and greater security.