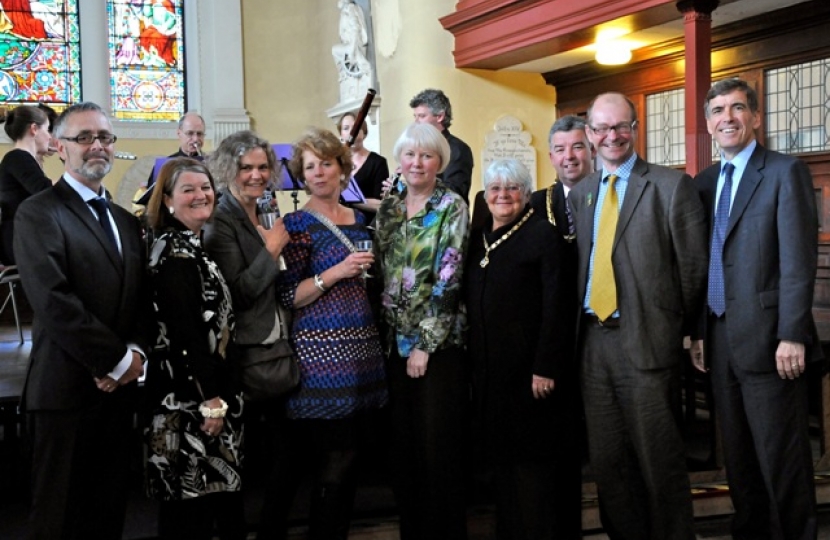 The fourth Macclesfield Barnaby Festival (and the biggest yet) officially launched on Friday 14 June 2013, at the historic town centre venue of Christ Church - dormant for the last 30 years but brought back to life as the flagship venue of this year’s celebrations.

Following the launch, Macclesfield threw open its doors for the beginning of the Barnaby Art Trail (14-30 June) which includes three other disused buildings transformed into art spaces for the festival - an empty unit in the Grosvenor Shopping Centre, historic Charles Roe House on Chestergate and an empty retail space on Churchill Way.

David Rutley, MP for Macclesfield, also attended and says: “It was tremendous to see this year’s Barnaby Festival get off to such a great start. Having the event in Christ Church showed its strong roots in Macclesfield’s heritage, while the Art Trail demonstrated the real strength of creative talent on offer. I was particularly pleased that James Berresford, Chief Executive of VisitEngland, was able to attend and show his support for this important festival that helps make Macclesfield a distinctive destination.”

James Berresford, Chief Executive of VisitEngland comments: “I was delighted to attend the launch of the Barnaby Festival. It’s a fantastic example of something we do very well in this country – celebrating our heritage through music, art and performance and done with a great sense of humour. Only in England could a centuries-old tradition be reinvented to include button art and pub walks, and we are much richer for it!”

Lynne Jones, Barnaby Festival Chair says: “This festival is our biggest yet and has taken an enormous amount of time and effort by a dedicated, resourceful and creative team of volunteers. And we couldn't have done it without the financial and ‘in-kind’ support of sponsors and local businesses. Our theme this year is 'metamorphosis' and we’ve transformed disused buildings into arts and performance spaces for Barnaby - including the town's magnificent and neglected Georgian gem, Christ Church. The Festival is a taste of what Macclesfield can be - and what people working together can achieve.”

Macclesfield Barnaby Festival is a reinvention of the centuries-old Maxonian tradition of feast days and holidays marking St Barnabas’ Day. A contemporary festival of arts, culture and fun, Barnaby takes place every June and brings the town centre to life with music, comedy, performance, street entertainment and visual art. Barnaby is a grass-roots organisation run entirely by volunteers.