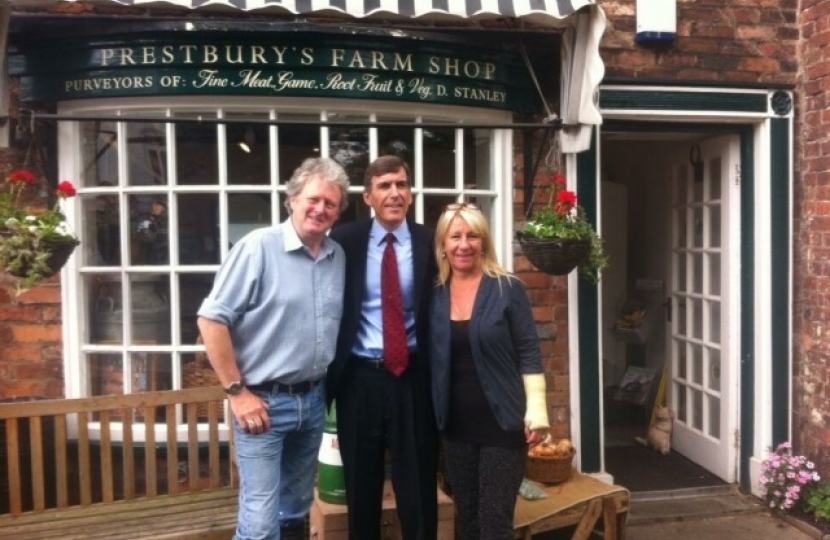 Following a Twitter invitation from Prestbury Farm Shop owners, Charlie Lawson and Debbie Stanley, David Rutley MP visited the store to find out more about the local produce on offer.

Prestbury Farm Shop was opened by Charlie and Debbie in 2010 and has firmly established itself on the Prestbury shopping scene. During the visit, Charlie and Debbie spent time with David telling him about their range of local products, from Cheshire new potatoes and asparagus to a range of fine meat.  The shop takes great pride in its local produce and relationships with local farmers.  Much of Charlie and Debbie’s time is spent promoting local farm produce.  They work closely with schools to help explain how food gets from farm to fork.

Charlie said, “Debbie has worked so hard at providing a first class farm shop in Prestbury and we look forward to welcoming more local shoppers to the shop in the weeks ahead.”

Following his visit, David said, “It was good to meet Debbie and Charles to find out more about their products.  I was impressed by the range of local produce on offer and the work they are doing to support Cheshire farmers.  Prestbury Farm Shop is a great example of an independent shop working to support its local community.  I hope more local residents will be encouraged to shop local.”

You can visit the Prestbury Farm Shop website here: